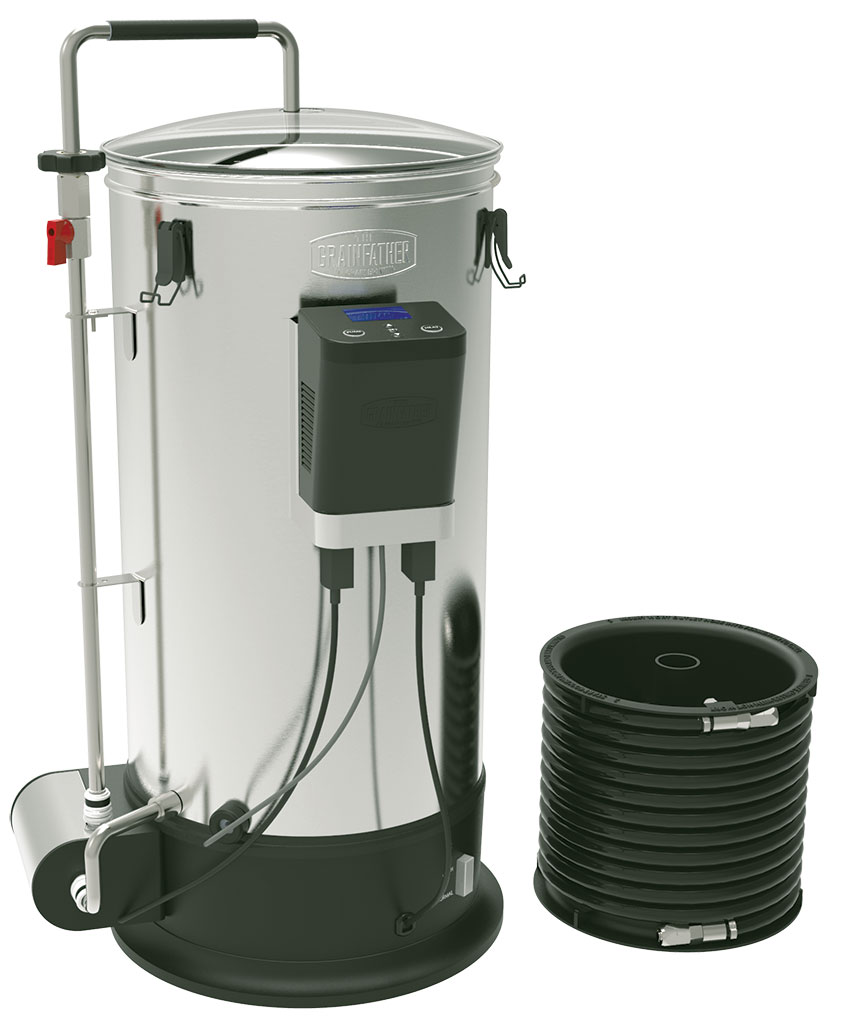 In stock, will ship on Wednesday, June 29

Read or Write a Review

The Grainfather is a 220 volt compact self contained RIMS mashing, boiling, and cooling system for mashing 5 gallon batches of beer. It features a 6 watt recirculating pump, for the mashing stage, and a separate counter flow wort chiller that you insert into the Grainfather when it is time to cool the 5 gallon batch after the electric powered boil.

After the mash cycle is done, you lift the grain basket partially so you can manually sparge by pouring water over the grain basket into the Grainfather below. You need to heat your own mash water, either by heating 5 gallons or so to boiling with the Grainfather before mashing and storing it in a stainless boiling pot, or heating when it is time to sparge with a separate brew pot on a stove. What we did was heat our sparge water in the Grainfather by getting it to boil in the Grainfather, then transferrring to a stainless boiling pot, and putting a lid on the pot. We then heated the pot briefly on a stove to raise it from 160° F. to the 168° F. needed for sparging,

After manual sparging, the grain basket is removed and you set the 1600 watt electric element to boil. It takes about 60-80 minutes to come to boil depending on ambient temperature. Hops are added manually during the boil per your recipe plan.

When the boil is over, you insert the included counter flow wort chiller to chill the wort which requires an external supply of cold water to run.  Our tests found this counter flow chiller extremely efficient, we chilled a 5 gallon batch of Double IPA to pitching temperature (about 78° F.) in 25 minutes, and only used 20 gallons of 70° F. water. It was so efficient that we just ran the end of the wort pipe from the counterflow directly into our fermenter.

After brewing, you run about 3 gallons of water (ideally saved from the chill) through the GrainFather again with a bit of PBW or other cleaner to clean the pump, lines, and counter flow chiller.

The Grainfather comes with a 3 year warranty.  We also offer a 60 day money back guarantee on everything we sell, even if you have used it (although this does not cover return shipping). It is 27" tall with the recirculation tube attached, the cylinder body is 12" in diameter, and 15" in overall diameter when you consider the pump and thermostat.

A Grainfather app which allows you to upload recipes, and times your brew, is available free for Android and iOS. For iOS, go to iTunes and search for Grainfather, for Android, go to Google Play (the Android App has just been updated!). The included Connect Controller includes Bluetooth connectivity.

Important Note: A signature is required upon delivery, so pick a shipping address where someone is available to sign during the week.

We highly recommend you read the excellent Grainfather instruction manual before ordering.

You can be the first one to write a review.